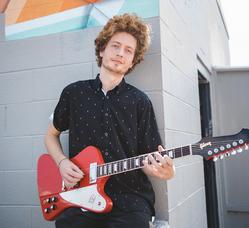 ​Brendan “Debo” DeBonis is a freelance live/session multi-instrumentalist based in Nashville, TN, who is stylistically versatile and always dependable. His skill set includes being a proficient guitarist, bassist, and drummer, with the ability to sing both lead and backing vocals when applicable. Initially influenced by classic/alternative rock music, his skill set has since expanded to also include pop, R&B, country, funk, and even some jazz as well. His time and hard work put into every show is exemplified by the nuance and accuracy of his performances, and high-energy stage presence. He has worked with Grammy-winning producer Mitch Dane on original releases with his prog-rock band Gentry Blue, and has opened for household names such as Brothers Osborne with top-25 charting country artist Phillip Michael Parsons. So if anybody needs a professional and reliable instrumentalist with extensive music theory knowledge, DeBonis is your guy!